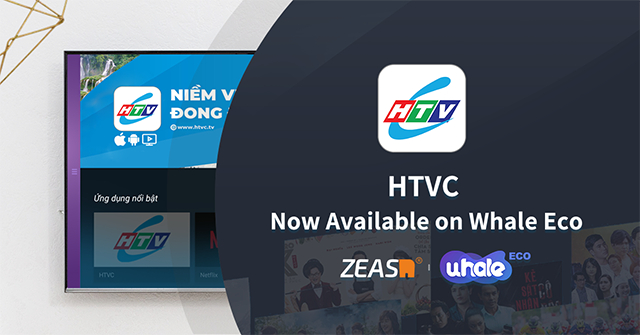 Ho Chi Minh City Television (HTV) is a Vietnanmese television network owned by the People’s Committee of Ho Chi Minh City, being a household name for around half a century. HTV Technology Media Services Company Limited is the first enterprise of HTV and its TV channels distribution center HTVC was established July 1, 2003. HTVC is currently broadcasting more than 160 domestic and foreign TV channels of a wide variety of categories, such as movies, music, sports, news, science, tourism etc. in Ho Chi Minh City and other provinces. Other than great choices of quality channels, the HTVC TV app also obtains a video library with more than 10,000 entertainment programs providing a good deal of choices to audiences.   HTVC TV app was submitted and launched on Whale Eco through ZEASN’s Partner Portal.The Partner Portal is a SaaS product created by ZEASN for content providers to easily create, validate and launch their apps. Through the portal, content providers are able to check app statistics, promote their products and monetize their contents. The Partner Portal aims to create an easy-to-use platform that accelerates the process of planning, building, testing, releasing and other elements within the loop of their apps on Whale Eco-enabled smart TV devices.  “It is a pleasure to include the massive content library from one of the most well-known television networking brands HTVC in Whale Eco.” Commenting on the partnership, Edward Hsiao, the Regional Director for APAC of ZEASN said, “As one of the flagships in television networks in Vietnam, HTV has been around for more than 50 years, providing quality broadcasting services that form lively memories in generations. Cooperating with great partners globally lays the foundation of our commitment of providing optimal services to global Whale Eco users through ever-growing content portfolio, constant innovation and cutting edge technology.” About HTVC HTVC cable television was established on July 1, 2003. HTVC was born to meet the aspirations of a large number of domestic and foreign audiences about the need to enjoy diverse cultural and entertainment products. HTVC's goal is to diversify television services, offering more choices to customers, by providing domestic and foreign TV programs of various genres, by many methods, on the basis of The facility welcomes and applies advanced and modern television technology in the world.   HTVC is currently broadcasting more than 160 domestic and foreign TV channels to serve audiences. In particular, with the HTVC cable network, the audience will enjoy a number of other additional services such as high-definition television (HDTV), TV on demand (MOD), Mobile TV, high-speed internet access and many other interactive services between the audience and HTVC.